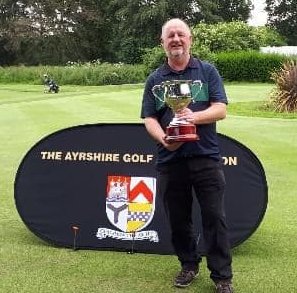 Stephen Lucas (Ayr Belleisle) won the Ayrshire Seniors Championship at Ayr Dalmilling on Tuesday 16th July by a full four shots from his nearest rivals as the 60 competitors enjoyed fine weather for this years’ competition.

Playing off a handicap of 11, Lucas returned a scratch score of 72 for an 8 under par nett total of 61 to win the Sandy Provan Trophy this year.

One handicapper Paul Denim (Loudoun) recorded the best scratch score of the day with a three under par 66.

In the 50 – 59 age category there were two nett 65’s returned, with Craig Robertson (Abbotsford) edging top spot ahead of Bob Cameron (Ayr Belleisle), by virtue of the better inward half. Allan Coulter (Ayr Belleisle) was one shot further back in third place.

All three prizes in the 60 – 69 age group were won with nett 66, with Brian Sherwood (Machrie Bay) coming out on top by virtue of the better inward half, ahead of Derek Gemmell and Jim Ryan, both from the host club.

In the over 70’s age group, William Smillie (Ballochmyle) was four shots clear on 65 to take the first prize, with John Boyle (Ardeer) and Bill Megraw (Prestwick St Cuthbert) taking the other prizes.

There were also two nearest the pin prizes up for offer on the day. Derek Gemmell (Ayr Dalmilling) was nearest I one at the 6th hole with a shot to 4 feet 2 inches whilst nearest the hole in two shots at the 16th was won by Paul Denim (Loudoun) who hit his approach to 69 inches from the hole.

At the conclusion of play Ayrshire Golf Association Past President Ricky Magee presented the awards to the prizewinners present before handing over the Sandy Provan Trophy to the 2019 Ayrshire Seniors Champion Stephen Lucas.