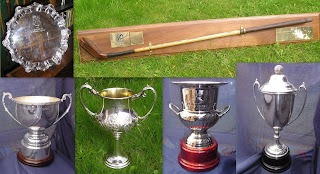 In the CHAMPION OF CHAMPIONS TROPHY competition, the two semi finals will take place at Royal Troon on the evening of Friday 2nd August, with the final scheduled for the same venue a week later, on Friday 9th August.

In the other half of the draw, a 2&1 home win in the quarter finals by Jamie Clark & Paul Robertson (Wallacetown) over John McGinn & James Brown (New Cumnock) put the Wallacetown pair through to the semi final where they will be at home to Stuart Wilson & James Mason (NB Parkstone) who won their home tie in the quarter finals against Eddie Gilmour & Neil McPherson (Tam O Shanter) by 4&3.

The semi finals are due to be completed by 25th August.

In the handicap club team knockout competition for THE PRESIDENT'S PUTTER, Caprington beat Muirkirk 3 - 0 in their quarter final at Caprington and will now host Ayr Dalmilling in the semi final.

In the lower half of the draw, Alton beat Moorpark by 2- 1 to set up a home tie in the semi finals against Kilbirnie Place who beat Braehead 3 - 0 at Kilbirnie in the last eight.

The semi finals are due to be played by 25th August.

In the scratch club team knockout competition for THE GARY BRYDEN MEMORIAL SALVER, Ayr Belleisle beat their visitors from Loudoun by 2 - 1 in the last quarter final tie to be completed, and the Belleisle team will be at home to trophy holders Royal Troon in their semi finals, with Kilmarnock Barassie hosting Troon Welbeck in the other semi final tie.

Both semi finals are due to be completed by 25th August.

The finals of the Gary Bryden Memorial Salver, The President's Putter and the Fourball Championship, as well as the Ayrshire Handicap League Championship, are scheduled to take place during Finals Day at Skelmorlie GC on Sunday 1st September.