Host Area Fife will battle it out with Lothians, Stirlingshire and Glasgow for the GolfKings Scottish Area Team Championship title after leading the stroke play stage of the weather-shortened qualifying round at Crail Golfing Society on Saturday 18th May.

Ayrshire fell five shots short of qualifying for the matchplay stages after the qualifying was reduced to one round with two scores from each course counting towards the team total.

As winds gusted at over 40mph, combined with driving rain, SGU organisers were forced to reduce the event to one round of qualifying and abandon this afternoon’s play, with the two best scores from each course (Balcomie and Craighead) counting for the team’s qualifying total.

That left Fife, the 2011 champions, as leading qualifiers from the 16 Areas with a total of 294, two shots clear of title record holders Lothians. Stirlingshire made it through in third place on 299, while Glasgow edged out Clackmannanshire by a single shot on 306 to seal the fourth semi-final berth.

Scott, who admitted he was lucky with the draw teeing off in the first group at 7.30am in the slightly more benign conditions, was delighted with his side performance in his Area Team Championship debut:

“The draw certainly helped us as we were all out early, although we still went out and played good golf. Conditions weren’t too bad for the first 7 holes of my round, but the wind started to pick up by the 14th tee, although I managed to play the last five holes in one under including chipping in for a 2 at the last.”

Team-mate Ally Hain produced a fine 70, with former SGU Order of Merit No 1 James White battling to a three-over par 75 on the Craighead to secure the Fife’s team place in the semi-finals, where they’ll face Glasgow.

Lothians, who’s last title win was back in 2007, had fine rounds from Anthony Blaney and Alyn Dick, 71 and 73 on the Balcomie, while Benn McLeod’s 78 counted alongside Henderson’s excellent effort on the Craighead course.

Scotland Boys international Savage was Glasgow’s best performer, while Conor O’Neil survived two triple bogeys to record a 74 and keep his Area in the hunt for their first Championship since 1991.

Last year’s SGU Order of Merit winner Scott Borrowman gave Clackmannanshire hope of a semi-final spot with a fine 69 on the Balcomie, but they had to settle for fifth spot behind, two shots clear of Renfrewshire and North East, while defending champions Perth & Kinross fell at the first hurdle, well down the field in 11th place.

SGU Events Manager Daniel Sommerville explained the decision behind reducing the qualifying to one round: “Conditions became extremely challenging for the later starters with balls moving on the more exposed greens and forecasts for worsening weather this afternoon. We felt the decision was the most equitable way of deciding the qualifiers with two scores counting from each course and hopefully we’ll have better weather for the match play tomorrow.” 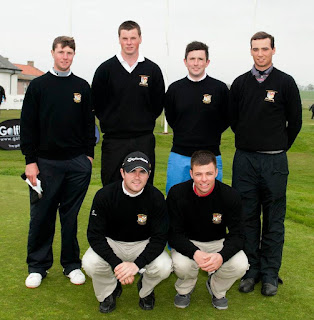