With all the second round matches in the 2013 Ayrshire Fourball Championship due to be completed by Sunday 19th May, a number of results have been posted recently.

Title holders David & George McCulloch (Brunston Castle) continued their defence of the trophy with a 5 & 4 win away from home against Alex Young & Alan Stewart (Stewarton). The holders now face an away match against Ross & Craig Anderson (Kilbirnie) who had a 5 & 4 win in round two over their visitors, Darren Mallinson & William Howat (Irvine Ravenspark).

William Fleming & David Muir (Ballochmyle) have a home match against Andy Turnbull & David Cook (Fenwick)  in the third round. The Ballochmyle pair progressed courtesy of a 4 & 3 home win over Fraser Williamson & Alan Lochrie (Kilmarnock Barassie) whilst the Fenwick team had an away win by the same score against John McDonald & Steven Wilson (Wallacetown).

A 5 & 4 home win over Robert McMaster & Graham Andrew (Girvan) saw Martin Brown & Gary Harris (Malletsheugh) through to round 3, where they will be at home to Mick McGowan & Gerry Reid (Alton) who had a 3 & 2 win away from home against John Brodie & Gordon Christie (Chase) to book their place in the last 16. 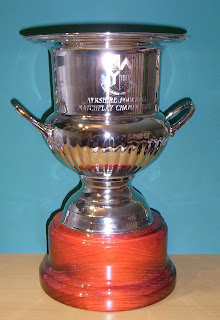 John & Martin Burrows (Skelmorlie) beat Ricky Black & Keith Fairley (Irvine) to set up another home match in round three, against either Rowallan Castle or Muirkirk.

Douglas McMaster & Gary Robinson (New Cumnock) had a home win by 3 & 2 over Bryan Christie & Brian Wylie (Ardeer) in round two and now face an away tie at either Maybole or Largs Routenburn in the next round.

Paul McIvor & Tom Clark (Loudoun) will entertain Wullie Creevey & Ronnie Alison (Saxone) in the last 16, the Loudoun pair winning by 3 & 2 away to Ian Leishman & Brian O'Neil (North Beach) in round 2 whilst the Saxone pairing had a 5 & 4 win away to John Toal & Kevin Campbell (Glacier).

James Graham & Marc Wallace (Doon Valley) beat their hosts Chris Bradley & Ryan Boon (Ayr Belleisle) by 4 & 3 in round 2 and now have a home match in the third round agasinst Marc Smith & Craig Boyle (Caprington), who were also winners away from home in round 2 when they beat Colin Pettigrew & Drew McCutcheon (Drongan)  by 2 & 1.

Edward Saunders & John Paul Flanigan (Troon St Meddans) beat Ian & Craig Durward ( Ayr Seafield) by 2 & 1 in the second round and now face an away tie at either Moorpark or Beith in the third round.