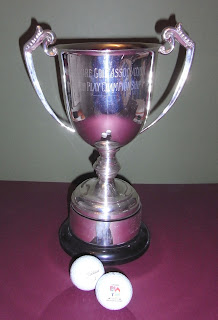 Matches in the the first round of the 2013 Ayrshire Matchplay Championship were held at Prestwick St Nicholas GC on Monday night, with competitors enjoying fine conditions.

The new Ayrshire Strokeplay Champion, Stuart Robin of the host club, had the better of the tie against hs clubmate Kevin Brock, winning by 3 & 2 to progress to the quarter finals where he will play George Robertson (Irvine Ravenspark) who had a two hole win over Alan McLean (Kilbirnie Place).

Defending champion David Wilson (Troon Welbeck) was pushed all the way by Craig Adams (Irvine) before claiming a second round place with a one hole victory. In the quarter finals Wilson will play Steven Stamper (Girvan) who beat Darren Mallinson (Irvine Ravenspark) by 2 & 1 in round one.

The 2008 matchplay Champion Craig Hamilton (Ballochmyle) had a 4 & 2 win over Brian Moore (Largs) to set up a quarter final match with the 2009 title winner Scott Brown (Turnberry), who beat John Haggarty (Loudoun) to secure his place in the last eight.

Quarter final matches are scheduled for Tuesday with the semi finals on Wednesday and the final on Thursday evening.

The quarter final ties are :-