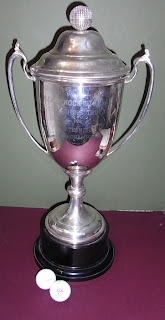 More second round results have been posted recently in the 2013 Ayrshire Champion Of Champions competition.

Gary Jordan (Crosshouse) is through to round three after a 3 & 2 home win over Craig Robertson (Abbotsford). Jordan is now away from home against either Andrew Armstrong (Moorpark) or Bert Ferguson (Troon Welbeck).

Also through to the last 16 is Iain Fraser (Troon St Meddans) who had a 7 & 6 victory at Troon over Gary Steele (Maybole). In the third round Fraser is at home again, against either Derek Ballantyne (Ardeer) or Iain Girvan (Muirkirk).

The other player through to round 3 recently was Steven McEwan (Caprington) who was given a walkover by Jim Brown (Saxone). McEwan will face an away match in the last 16, against either John Shanks (Irvine) or John Wylie (Glacier).

The result of eleven of the second round ties remain outstanding, with all ties due for completion by 19th May.
Posted by AJM at 9:00 pm