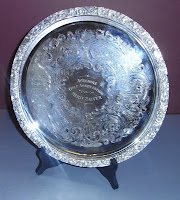 Holder David Wilson (Troon Welbeck) is in pole position in his defence of the Doc Thom Ayrshire Order Of Merit after the first three counting events of the season.


The next counting events are the Scottish Strokeplay Championship at Southerness from 31 May to 2 June, the Belleisle Cup on 2 June and the Seafield Open and Ballochmyle Open on 8th June.