AYRSHIRE CHAMPION OF CHAMPIONS - Robert Adams through to quarter finals 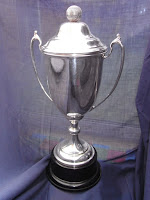 Robert Adams (Abbotsford) is the latest player into the quarter finals of the 2017 Ayrshire Champion Of Champions Trophy competition.

The other players through to the last eight so far are Graeme Gimson (Prestwick St Cuthbert), iain Fraser (Troon Portland) and Gordon Munro  (Caprington).

The four remaining third round matches are due to be completed by Sunday 18th June.
Posted by AJM at 12:45 am