PRESIDENT'S PUTTER - Line up for the quarter finals confirmed 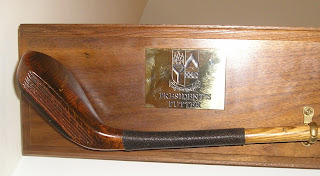 The 2022 handicap club team knockout competition for the President's Putter is now at the quarter final stage, with the eight participants being confirmed this week.

A 2 - 1 home win over Skelmorlie by Moorpark earned them a home tie in the quarter finals against Loudoun, who defeated Royal Troon 3 - 0 in their third round tie at Loudoun.

Irvine Ravenspark will entertain Largs in the quarter finals, following the latter's 3 - 0 home win over Prestwick St Nicholas in round three.

3-0 home wins by Caprington and Kilbirnie Place, over Crosshouse and Portmann respectively, set up a quarter final clash between the two clubs over the Caprington course.

West Kilbride will visit Rowallan Castle in the last eight following Rowallan Castle's home win by 2 - 1 over Troon Portland in their third round clash.

The quarter final ties are all due to be completed by the 24th of July.