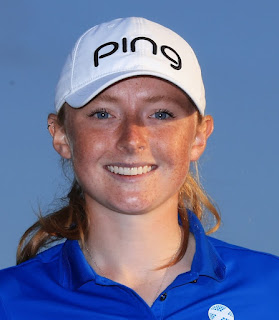 Louise Duncan (West Kilbride) and her Great Britain & Ireland team mates lost out to the United States of America team by 15.5 - 4.5 in the 2022 Curtis Cup match, held at Merion Golf Club in America from the 10th to the 12th of June.

The G. B. & I. team were up against it after losing the Friday matches by 5 - 1. In the foursomes, which were lost 3 - 0, Louise paired up with fellow Scot Hannah Darling, but were defeated 5&3 by Jenson Castle & Latanna Stone. In the Friday fourball matches Louise was paired with England's Charlotte Heath and recorded their team's first point with a 2&1 win over Rose Zang and Emilia Migliaccio.

Louise did not play in the Saturday foursomes, which were shared 1.5 - 1.5 and in the Saturday fourball matches teamed up again with Charlotte Heath, losing out by a single hole to Emilia Migliaccio and Latanna Stone, as the United States team took the session 2 - 1.

In the Sunday singles, the United States team stormed to a 7 - 1 victory in the session, with Louise being defeated 7 & 5 by Rose Zang.