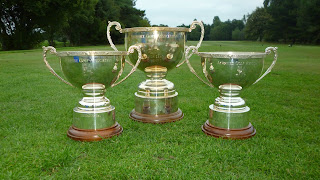 The latest positions in all four Ayrshire Scratch Leagues have been updated after several fixtures have been played recently.

In DIVISION 1, Prestwick St Cuthbert are still looking for their first points of the season after a third successive defeat, by 4.5 – 1.5 away to Largs, who currently lead the title chase.

In DIVISION 2, Ballochmyle and Troon Portland lead the way, with the former having played two games less to date.

In recent matches Ballochmyle recorded a 4 – 2 win away to West Kilbride and a 3 – 3 draw away to Troon Portland, whilst Portland’s hopes suffered a setback with a 3.5 – 2.5 defeat away to Caprington, despite also recording a 4 – 2 home win in the corresponding home match.

Rowallan castle are still looking for their first points of the campaign after successive away defeats by 4 – 2 at West Kilbride and 5 – 1 at Turnberry.

In DIVISION 3a, several results have still to be confirmed. Present positions in Division 3a are:-

In DIVISION 3b, Irvine Ravenspark suffered their third successive away defeat, going down 4 – 2 at Ardeer, which leaves the chase for the top spot very tight in the division.