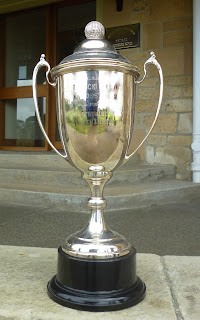 The quarter final line up for the 2022 Ayrshire Champion of Champions trophy competition has been confirmed, with the remaining third round ties being completed recently.

Blair Morton (Royal Troon) had a 3&2 home win over Adam Sweeney (Prestwick St Cuthbert) to book an away tie against Tommy McInally (Loudoun) in the last eight of the competition.

Scott Ainsworth (Ardeer) is away to Steven Stamper (Turnberry) in the quarter finals, after Stamper received a walkover from his third round opponent, Gordon Jess (North Beach).

The title holder Steven McEwan (Caprington) won his third round match, away to Del Chamberlain (Troon St Meddans) at the first extra hole, and will now be at home in the quarter finals to Keith Hamilton (Ayr Belleisle), who booked his place with a 2&1 away win over Robert Cruickshanks (Moorpark).

The four quarter final matches are due to be completed by the  24th of July.