Auchenharvie 88 are the 2021 winners of the handicap club team knockout competition for The President's Putter, following their victory in the final over local rivals Moorpark in the postponed final, held at Rowallan Castle on Sunday the 12th of September. 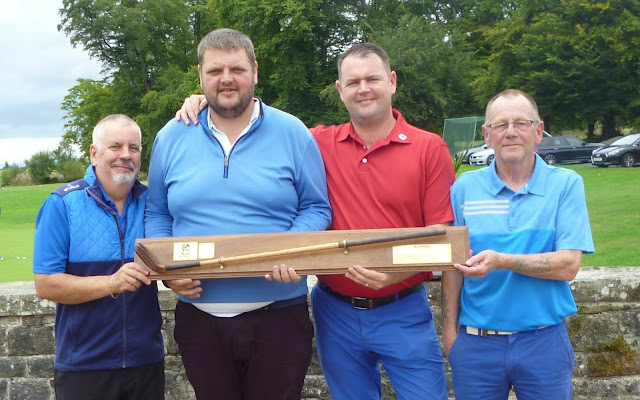 As Moorpark were in the final of the Handicap League Championship, played at Kilmarnock (Barassie) on Finals day on Sunday the 5th of September, and with the co operation of both clubs, the President's Putter final was arranged for the following weekend, with Rowallan Castle being good enough to offer their facilities to hos the final.
In the final the two singles ties were evenly match, Andrew Armstrong (Moorpark) receiving three shots from Brian Robertson (Auchenharvie 88) whilst Willie Young (Auchenharvie 88) received two shots from Duncan McGlone (Moorpark) in the second tie. 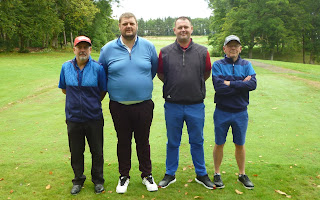 The biggest handicap margin was in the foursomes tie, where John Hargreaves and Brian King (Auchenharvie 88) gave six strokes to Alan Burns & Jamie Ralston (Moorpark).
As the match progressed over the opening holes it became clear that the destination of the title was likely to rest on the second singles tie, and so it proved to be.
The first singles tie went the way of Moorpark. Andrew Armstrong stormed to a four hole lead after seven holes and although Brian Robertson won the seventh to reduce the deficit to three, after thirteen holes he still trailed by three and  Andrew Armstrong closed out the tie by 5 & 4 to give Moorpark the lead in the match.
In the foursomes tie it was the Auchenharvie 88 pairing of Hargeaves and King that tooke an early lead and by the eighth hole had established a three hole advantage. This lead was extended to four holes at the turn when they won the ninth and they eventually closed out the tie by 5 & 3 to square the match at 1 - 1, leaving the second singles tie to decide who would be the custodians of the trophy for the next 12 months. 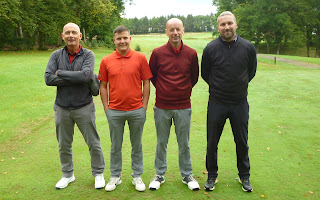 The second singles tie, between Moorpark's Duncan McGlone and Auchenharvie 88's  Willie Young, was a tightly contested match throughout.
Willie Young held a single hole lead by the seventh  and was still in front after twelve holes before Duncan McGlone took the thirteenth hole to square the match. By the sixteenth hole Willie had again edged in front by a single hole and after Duncan found heavy rough with his tee shot on the par three seventeenth, and found further trouble in a bunker after struggling to extricate his ball from the rough, Willie was able to chip up from the front of the green and, although he missed his par put, prompted a concession of the hole, and the tie, from Duncan by a 2 & 1 margin, to win the President's Putter for Auchenharvie 88 for 2021.
At the conclusion of the match, Ayrshire Golf Association Secretary Alasdair J Malcolm (Prestwick St Cuthbert) handed over the President's Putter trophy to the victorious team from Auchenharvie 88 Golf Club.
Match Details (Moorpark names first)
Andrew Armstrong (16) beat Brian Robertson (13) by 5 & 4
Duncan McGlone (14) lost to Willie Young (16) by 2 & 1
Alan Burns & Jamie Ralston (16) lost to John Hargreaves & Bryan King (10.5) by 5 & 3
MOORPARK   1    AUCHENHARVIE 88    2
Posted by AJM at 12:32 am