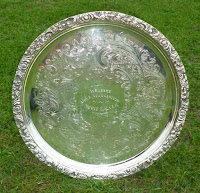 Michael Smyth (Royal Troon) has won the 2021 Ayrshire Order of merit, for the Doc Thom Salver, following confirmation of the results of the penultimate counting event, The Stone Trophy at Routenburn in Largs, which took place on Saturday the 11th of September.


With none of the chasing pack featuring at the event, Michael Smyth’s lead at the top of the table cannot be overtaken with just the Arrol Cup at Prestwick St Nicholas on Saturday the 18th of September still to take place before the final placings are established.

At the Stone Trophy, Cameron Aitkin of largs took maximum points with a scratch score of 66, one ahead of Adam Sweeney (Prestwick St Cuthbert).

Steven Gallacher of the host club finished his round with a hole in one at the 18th hole during the competition.

Whilst Michael Smyth has won the title this year, there are still several players who can secure second and third places overall, with good performances at the Arrol Cup, with over 15 players still in with a change of a place in the prize list.

Present positions, with just one counting event remaining, are:-