The Ayrshire team failed to qualify for the semi finals of the 2021 Area Team Championship, played at The Kings Golf Club, Inverness, from Friday the 3rd to Sunday the 5th of September. 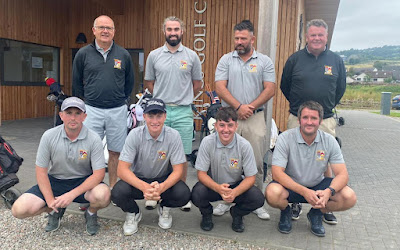 On the opening day, with five of the six scores counting on the par 70 course, Michael Smyth (71), Jack Broun (72), John Shanks (73), Ruben Lindsay (75), Steven Wallace (75) and Blair Morton (79) combined for a 16 over par total which left them in thirteenth place overall after day one, a full 26 shots behind the joint leaders, Lothians and The North.

To the team’s credit, they came out fighting on day two and were the most improved of the 16 Area Associations teams on Saturday, Jack Broun (65), John Shanks (66), Blair Morton (70), Steven Wallace (73), Ruben Lindsay (74) and Michael Smyth (74) posting a vastly improved second day score which pushed them up to eighth place overall with a two round team total of 14 over par.

Despite the sterling effort on day two, the team were well adrift from the ten under par total, or better, that would have been required to secure one of the four semi final places, which were ultimately filled by Lothians, Borders, North and Perth & Kinross.

In the final on Sunday afternoon, Lothians beat Borders 3.5 – 1.5, having overcome Perth & Kinross by 3 – 2 in the semi finals, whilst Borders beat North by the same score.