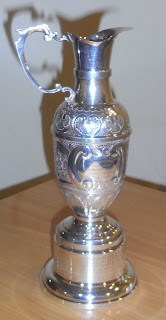 The Ayrshire Golf Association Under 18 county team retained the David Wishart Trophy and West Of Scotland Inter County Under 18 Championship title in dramatic style on Sunday 1st September 2019 with a win over Stirlingshire at Falkirk Golf Club.

With three wins from four in the series, Ayrshire went into their final match knowing that they needed to record a better result than nearest rivals Renfrewshire, who were away to Lanarkshire at Wishaw in their final fixture, to retain the title they won for the first time in twenty two years in 2018.

In the lead Under 16 tie John McCracken (Kilmarnock Barassie) lost by 3 & 1 but wins by 8&6 from Fraser Russell (Royal Troon), 3&2 from Harvey Broadfoot (Troon Welbeck) and 2&1 by Ayrshire Boys Champion Kerr Brooks (Irvine)  put Ayrshire 3 - 1 ahead with the under 16 ties completed.

Rob Yorston (Loudoun) and Harvey McDonald (Ayr Belleisle) lost their ties by 4&3 and 2&1 respectively to level the match score for Stirlingshire but in the penultimate tie jack Allan (Ballochmyle) won through by 3&2 to put Ayrshire ahead 4 - 3.

The new Ayrshire Boys Matchplay Champion Ross McDonald (Kilmarnock Barassie) was in the anchor tie for Ayrshire and he showed all his matchplay mettle on the final green, securing a vital half match to give Ayrshire the match by 4.5 - 3.5 to maintain their title hopes.

With the match concluded, news filtered through that the match between Lanarkshire and Renfrewshire had also been decided in the final tie, on the final green, and to Ayrshire's joy the ultimate result was a 4 - 4 draw, which ensured that Ayrshire would retain the West League title in 2019.

Throughout the five match series Ayrshire used a total of fifteen players. The players who contributed to the succesful title defence were:-