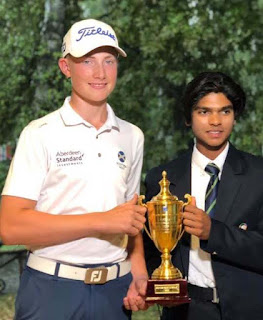 Ruben Lindsay (Ayr Belleisle) was the joint winner of the weather shortened 13th Reply Italian International  Under 16 Championship for the Teodoro Soldati Trophy, when the championship took place at Golf Club Biella “Le Betulle” from 3rd to 5th September.

The international field of 144 for the championship included representatives from twent one countries from throughout the world.

Following opening rounds of 74 and 73, Amilkar Bhana (South Africa) stormed up the leaderboard to join Ruben Lindsay at four under par overall, following a superb five under par third round of 68.
The cancellation of the fourth and final round left organisers to declare Ruben Lindsay and Amilkar Bhana as joint winners of the individual championship.

In addition, Ruben Lindsay contributed to the Scottish team, alongside Gregor Graham and Calum Scott  finishing third in the Nation’s Trophy with a score of 291, two shots behind winners Denmark and one behind Italy in second place.
Posted by AJM at 11:07 am