Four of the extended Ayrshire Golf Association competitions came to a conclusion on Sunday 1st September when the Finals Day was held at Skelmorlie Golf Club. 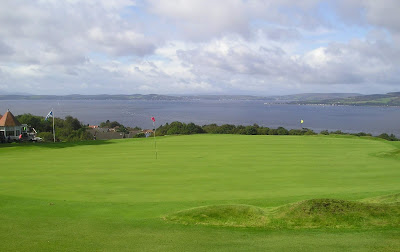 Following heavy rain on Saturday which saw the cancellation of the club competition, the course at Skelmorlie was in remarkably good condition for the finalists the following day, and the weather throughout the finals was kind, as all four competitions were concluded in tight finishes.


First off was the handicap club team knockout competition for THE PRESIDENT'S PUTTER, which saw Ayr Dalmilling take on the Alton club, who play out of Ardeer.

Dalmilling fielded a low handicap team and gave four shots in the foursomes tie and nine and eight shots in the two singles ties.

Dalmilling's Sean Thorburn (8) and Tony McCurdie (8) were up against Graeme Kerr (13) and Euan Findlay (10) of Alton in the foursomes tie and it was the Alton duo who secured their team's first point with a 2&1 victory.

In the anchor tie, Glenn Wilson (4) beat Gerry Reid (12) to level the match overall, leaving the destination of the trophy to be decided by the result of the tie between Dalmilling's Adam Cambers (1) and Michael Tulloch (10) of Alton.

The match was a close one and went all the way to the final green before Michael Tulloch edged a single hole victory to give Alton their first win in a county competition, taking the President's Putter with a 2-1 match scoreline.

The second final was the AYRSHIRE FOURBALL CHAMPIONSHIP, between Frank Grant (9) & Hugh Wales (13) of Ardeer and Stuart Wilson (8) & Jim Mason (9) of NB Parkstone.


The Ardeer pair were bidding for their first title win, whilst NB Parkstone, under their previous title of North Beach had a previous win in the competition in 2002.

Jim Mason opened with a birdie three to put NB Parkstone one up but a concession at the second levelled the score for Ardeer.The NB Parkstone duo won the fifth and sixth to go two ahead but the lead was short lived when the Ardeer pairing won the seventh and eighth to level the match, which remained that way as the finalists turned for home.

A birdie three at the tenth from Jim Mason put NB Parkstone ahead once again and the lead was extended to two holes at the eleventh whe n a par three was good enough to take the hole.

NB Parkstone looked to be taking control when they won the fourteenth with a par four from Stuart Wilson to go three up, but a nett four at the fifteenth from Frank Grant  followed by a par three at the following hole by the same player was enough to take both holes and reduce the deficit to one hole with two to play.

At the penultimate hole it was NB Parkstone's Stuart Wilson who had the better of the other three players, a par four securing the hole and the 2019 Ayrshire Fourball Championship title for NB Parkstone with a 2 & 1 victory.

The third final to be concluded was the AYRSHIRE HANDICAP LEAGUE CHAMPIONSHIP, which pitched Ayr Dalmilling and Kilbirnie Place together in the title decider.


The line ups were evenly matched, with only three shots in total being given over the six ties, and the match itself proved to be equally as close, going to the final putt on the final green of the lat match on the course before the destination of the trophy was decided.

Alan Myers (7) from Kilbirnie put the first point on the board with a 3&2 win over Stuart Thorburn (7) in the second tie on the course but this was soon countered when Dalmilling's Kieran Johnston (8) beat Scot cairns (9) of Kilbirnie by 4&3 in the third tie.

With the lead tie between Dalmilling's Scott Adams (5) and Kilbirnie's Scott Chesney (5) finishing all square, the match score was 1.5-1.5 with three of the six ties completed.

Martin Whiteford (12) put Kilbirnie ahead in the match again with a 3&1 win over Lee Robertson (11), but again the overall match was squared when Mark Adams (12) beat Dougie Johnston (13) of Kilbirnie by 2 holes in the penultimate tie of the match.

With the match standing at 2.5 - 2.5, the destination of the trophy rested on the final tie between Dalmilling's David McGawn (14) and Kilbirnie's Craig Fulton (14) and in a last hole finish it was Fulton who secured a single hole victory to give Kilbirnie Place the Ayrshire handicap league Championship title for 2019 with a 3.5 - 2.5 winning score in the match.

The last final to be decided was the scratch club team knockout competition for THE GARY BRYDEN MEMORIAL SALVER, between Kilmarnock Barassie and defending champions Royal Troon.

The Kilmarnock Barassie team arrived for the final having all competed in their club's rearranged club championship final round on the Sunday morning, boosted by the news that one of their number Stuart Miller had won the Club Championship for the first time in the process, and it was Miller and Sandy walker who represented Kilmarnock Barassie in the foursomes tie against Blair Morton and Stuart Russell of Royal Troon.

Stephen Spence provided a singles win by 4&2 for Royal Troon over Greg Vernon and a two hole victory by the Royal Troon pairing in the foursomes ensured that Royal Troon would retain the trophy in 2019. The final tie progressed to the last hole with Michael Smyth one ahead, but when he  lost a ball at the last it was agreed by the two players that, due to the overall match result being a win for Royal Troon, their tie would be agreed as a half and did not progress to extra holes, leaving the overall score in the match as a 2.5 - 0.5 victory to Royal Troon.

At the conclusion of the four finals the trophies were handed over to the winning teams by Ayrshire Golf Association executive member Willie McCormick.
Posted by AJM at 3:23 pm