AYRSHIRE FOURBALL CHAMPIONSHIP - NB Parkstone through to the final 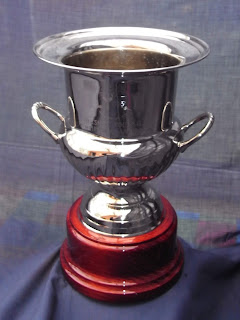 Stuart Wilson & James Mason (NB Parkstone) are through to the final of the 2019 Ayrshire Fourball Championship.

In the semi finals, the NB Parkstone duo were drawn away to Jamie Clark & Paul Robertson (Wallacetown) but despite not having home advantage the Prestwick club won through to the final with a 4&3 victory.

Wilson and Mason are now just one match away from taking the trophy to their club for the second time, following a previous success for the club in 2002, under the North beach name.

In the final the NB Parkstone duo will face either Frank Grant & Hugh Wales (Ardeer) or Alan Glass and Andy Dunlop (Prestwick St Cuthbert)
Posted by AJM at 2:09 am