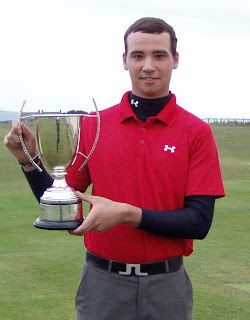 David Wilson (Troon Welbeck) rounded of a superb weekend and created a bit of history on Sunday 22nd April with his first win in the Ayrshire Strokeplay Championship, over the Prestwick St Nicholas course.

Having won the prestigious Edward Trophy by 4 shots, over Glasgow Gailes on Saturday 21st April, 17 year old Wilson repeated the winning margin to become the youngest ever winner of the Ayrshire Strokeplay Championship on Sunday.

With a capacity field of 60 players, and a handicap ballot of 2.2, Wilson was one of only five players who matched par or better in round 1 with his one under par 68 lying just one shot off the halfway lead held by Keith Hamilton (Ayr Belleisle) and John Haggarty (Loudoun) on 67. Stephen Spence (Irvine) and John Sloan (Doon Valley) were one shot further back on 69.
In the afternoon, 69 was the best score posted, which was achieved by four players. Along with Stuart Miller (Kilmarnock Barassie), Callum Beveridge (Troon Welbeck) and the ultimate winner David Wilson, former Champion Tommy McInally (Loudoun) was one of those players, and his second round effort saw him post a total of 142 to set the target, which was ultimately only bettered by two players in the field.
Despite fading a little in the afternoon, Keith Hamilton's 74 in round two was good enough to take the lead from McInally by one stroke on 141 and left David Wilson, in the final group on the course, as his only serious challenger for the trophy.
Needing a 3 over par 72 or better to take the title, Wilson stood on the final tee on level par. Despite his tee shot at the par 3 finishing hole coming to rest perilously close to a green side bunker, Wilson played a delicate chip to within a couple of feet of the hole and confidently slotted home his par putt for a level par round of 69 and the 2012 Ayrshire Strokeplay title with a four shot winning margin.
Prizes were presented to the leading players present at the conclusion of the competition by Ayrshire Golf Association President David J Miller who concluded the day's proceedings by handing over the trophy and champions medal to the 2012 winner, David Wilson.