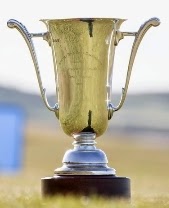 For the first time in many years, Ayrshire interest in the Scottish Boys Championship ended in round two on Wednesday at Dunbar, with all the remaining local players being knocked out of the competition at that stage.

Ewan Milligan (Kilmarnock Barassie) lost his tie, resumed from Tuesday, by 2 & 1 to Graeme Gillies (Pumpherston) and he was soon followed by Ayrshire Boys Champion Jack Thomas (Irvine) who fought back from three down after seven holes against Gregor Macintosh (Mannings Heath) to take the tie to extra holes before losing out at the nineteenth.

Charlie Cameron (Ayr Belleisle) also went to extra holes in his tie with Conor McCallum (St Andrews New), before losing out at the 20th hole of the tie.

Ayrshire's 'Black Wednesday' was complete in the final match of round two when Robbie Muir (Kilmarnock Barassie) lost by 5 & 4 to Callum  Allison (Bathgate), ending any prospect of an Ayrshire title challenger
for 2015.
Posted by AJM at 8:39 pm