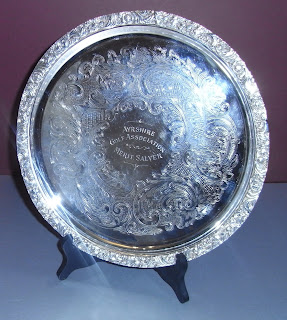 Michael Smyth (Royal Troon) remains in pole positions in the chase for the Doc Thom Salver and Ayrshire Order Of Merit title with only five of the counting events remaining to be played.

Following the most recent events, the Brunston Castle Open and The Gowf Cup at Loudoun,  Smyth's lead at the top of the table has been reduced to less than 30 points, with Stuart Robin (Prestwick St Nicholas) moving into second place  ahead of the title holder David Wilson (Troon Welbeck).

Steven Spiers of the host club took maximum points in the Brunston Castle Open to move into ninth place, after returning a scratch score of 69 in the competition.

In The Gowf Cup at Loudoun, the leading points were shared by local members Steven McEwan and Scott Gilchrist who tied on 139 over 36 holes, with Scott Gilchrist going on to win the trophy for the first time in a four hole play off.

The next counting event is the Scottish Amateur Championship at Blairgowrie later this month.

Following the Scottish Championship there are three counting events scheduled for August, being the Stevenson Trophy at Girvan on the 4th, the Viking Krus at Largs on the 18th and the Welbeck Links at Troon Welbeck on the 25th, and the final event will take place in September when the Arrol Cup is played on the 14th at Prestwick St Nicholas.