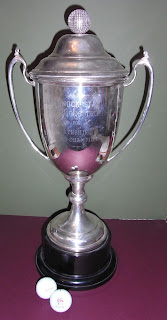 The Ayrshire Champion Of Champions  competition has reached the semi final stage, with both semi final ties scheduled to take place from 5.00 p.m. on Friday 2nd August over the Old Course at Royal Troon.

Hamilton  beat Bert Ferguson (Troon Welbeck) by 7 & 6 at Ballochmyle in the quarter finals whilst Andrew Jess had a 6 & 4 win at Belleisle against Derek Ballantyne (Ardeer).

McEwan, bidding to retain the trophy he won last year, secured his semi final place with a 5 & 4 win against Iain McKenzie (Largs Routenburn) over the Routenburn course whilst Smith had a 3 & 2 home win over Alan Smeeton (The Chase) to secure his place in the last four.
Posted by AJM at 8:55 pm