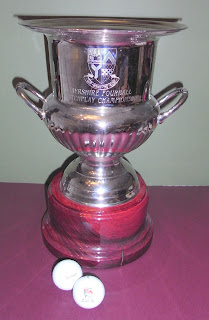 Maybole are the first team through to the semi finals of the 2013 Ayrshire Fourball Championship.

The Maybole pairing of  Gavin Campbell & Paul Ferguson had a home tie against Paul McIvor & Tom Clark of Loudoun in the quarter finals and ran out winners by 4 & 3.

The Maybole pairing now have another home tie in the semi finals, against either James Graham & Marc Wallace of Doon Valley or last years runners up, Robert Marshall & Phil Rooney of Beith

All quarter final ties to be completed by 28th July
Posted by AJM at 1:24 am