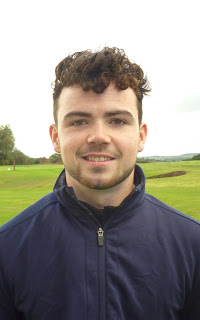 Kerr Brooks (Loudoun) is the 2021 Ayrshire Junior Champion of Champions trophy winner after victory in the final played at Irvine Golf Club on Sunday the 3rd of October.

The final was played in variable conditions with showers and a stiff breeze testing both players.

Kerr established a good lead over the opening holes which he maintained throughout the final and by the fourteenth hole he was dormie five.

To his credit Cameron never gave up and when Kerr missed the fourteenth green with his approach and failed to get up and down for par, Cameron negotiated a very difficult downhill putt in his attempt at a birdie three, leaving the ball just a couple of feet from the hole and then successfully holing the putt for a winning par four to take the match to the fifteenth.

At the fifteenth Cameron looked in good position to further reduce the deficit, finding the green in two whilst Kerr's approach finished in a difficult lie in the front right greenside bunker. Kerr played a good bunker shot to around 15 feet from the hole, but when Cameron narrowly missed his birdie attempt, his championship hopes were dashed, Kerr  completing a superb recovery by holing his remaining putt for an excellent par four, and a win in the match by 4 & 3.