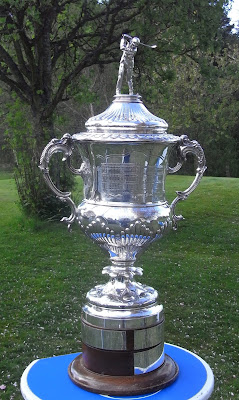 Ayrshire lost out in the semi finals of the 2018 Scottish Men’s Area Team Championship at Cawder on Saturday afternoon, following an injury setback to the team at the start of the matchplay stages.

In the quarter final match on Saturday morning against the Borders Sandy Buchanan (Prestwick St Nicholas) was due to partner Scott Brown (Prestwick St Cuthbert) in the foursomes tie, but due to an injury which developed following the strokeplay rounds the previous day, Buchanan had to withdraw from the line up and took no further part in the teams bid for the title.

As the rules of the competition does not permit substitutes, the foursomes tie in the morning was forfeit, leaving Ayrshire needing to win three of the four singles to progress.

Craig Hamilton (Ballochmyle) and Michael Smyth (Royal Troon) both recorded 4&3 wins and with jack Broun (Turnberry) losing out narrowly by 2&1, the destination of the semi final place fell to the tie featuring John Shanks (Irvine) a two time winning team member in the event.

Drawing on all his experience, Shanks edged home by a single hole to give Ayrshire a 3-2 win over Borders and a place in the semi finals in the afternoon against Fife.

Details of the quarter final tie (Ayrshire names first) were:-

In the afternoon, Ayrshire again began the match one down with Buchanan’s tie against Greg Wishart (Lundin) being forfeited, leaving Ayrshire again needing to take three points from a possible four to reach the final.

The task facing Ayrshire was made simple when Craig Hamilton (Ballochmyle) lost by 4&3 to Fraser Carr (Crail), meaning that all the remainig ties had to be won to progress.

A two hole victory for Scott Brown (Prestwick St Cuthbert) and Jack Broun (Turnberry) against David Mitchell Jr (Leven Thistle) and Scott Crichton (Aberdour) in the foursomes tie reduced the deficit to 2-1 and as the match progressed towards the last few holes, there was a possibility that an unlikely victory could yet have been secured by Ayrshire, with Michael Smyth (Royal Troon) two up with two to play and John Shanks (Irvine) one ahead after fourteen, but the win was not to be as Shanks lost out on the final green and Smyth, having lost the final two holes to be brought back to all square after 18, saw his tie declared a half after the overall result was confirmed as a win for Fife.

Despite a valiant effort on behalf of the team, the loss of a point before the match commenced proved just too much to overcome in their bid for a place in the final.

In the final on Sunday, Fife play North, who had a 3-2 win over near neighbours North east in the semi final.