AYRSHIRE CHAMPION OF CHAMPIONS - McInally defeated in opening round tie 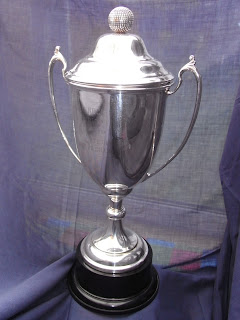 The five time former winner of the title, Tommy McInally (Loudoun) crashed to an opening round defeat in the 2017 Ayrshire Champion Of Champions Trophy competition this week.

McInally had an away tie against John Anderson (Skelmorlie) in the opening round and his host dashed McInally's hopes of a sixth title win following a single hole victory.

Anderson now faces an away trip to play Michael Smyth (Rpyal Troon) in the second round.

In the other tie completed this week Ian Smith (Troon Welbeck),  who was a semi finalist in the 1992 Scottish Amateur Championship at Glasgow Gailes,  booked his place in round two with a 3 & 1 home win over Martin Riddell (New Cumnock).

In the second round, Smith faces an away tie against either Steven Jackson (Wallacetown) or Jack Broun (Ayr Belleisle)

There are nine first round ties still to be completed by the closing date of 16th April, and the championship administrator wishes to remind all competitors that no extensions will be given beyond this date, for ties to be completed.
Posted by AJM at 1:45 am