THE HOME INTERNATIONALS - Scotland win on day one 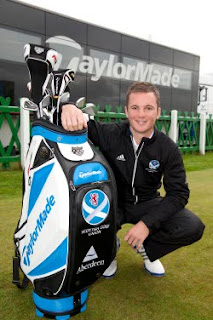 Scotland opened the 2011 Home International series, being played this week at County Sligo GC in Ireland, with a 9 - 6 win against Wales.

Ayrshire golfer Michael Stewart (Troon Welbeck) - pictured - teamed up with Ross Kellett in the morning foursomes and had a half match with R Bentham & A Jones as the spoils were shared 2.5 - 2.5 before lunch.

Despite Stewart losing by one hole to J Shufflebotham in the afternoon, Scotland took the singles series 6.5 - 2.5 to win the match.

In the other match played on Wednesday, Ireland had a nailbiting 8 - 7 win over England.

The matches continue on Thursday and Firday.
Posted by AJM at 10:49 pm