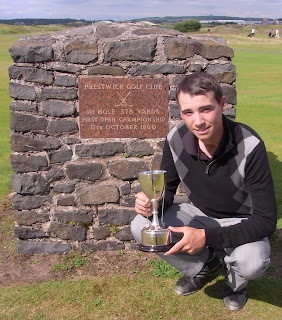 Scottish Boys Champion David Wilson (Troon Welbeck) remains on track for a hat trick of wins in the Ayrshire Boys Matchplay Championship after he successfully qualified to defend his title at Prestwick Golf Club next week.

With the eight best placed players in the Ayrshire Boys Championship qualifying to contest the matchplay title, the non availability of some competitors due to participation in national championshops next week, left the cut falling at 147 with two players from three on that score qualifying to play.
Recording a total of 145, David Wilson qualified comfortably enough in 6th place and now attempts to add a third successive title win after his successes in 2009 and 2010.

The Boys Matchplay Championship takes place at Prestwick Golf Club from Tuesday 9th to Thursday 11th August, with matches teeing off from 4.30 p.m.

Any player who is unavailable for the matchplay championship is asked to contact the AGA Secretary Alasdair Malcolm as sooon as possible, to allow for a replacement to be arranged if necessary.
The First round matches are :-