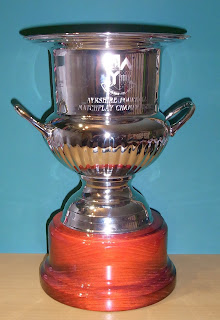 Three of the four semi finalists in the 2011 Ayrshire Fourball Championship have been decided, with the remaining  quarter final due to be completed by 7th August.

KEVIN McCORMACK & ROBERT PAYNE (Ardeer) beat Billy Pollock & Sandy Riddell (Skelmorlie) by 2 & 1 in their quarter final and now have a home match in the last four against IAIN & DAVID MACDONALD (Largs) who won their quarter final at home against David & George McCulloch (Brunston Castle) by one hole.

JIM MITCHELL & IAN FISHER (Ballochmyle) won their quarter final, at home against John Byrne & Colin Greenham (West Kilbride) by 3 & 2 and now await the winners of the tie between the 2010 runners up Johnny O'Neill & Garry Ross (North Beach) and Barry O'Rourke & Robert Nairn (Kilbirnie Place) in the semi finals.
Posted by AJM at 10:49 am