Michael Smyth (Royal Troon) completed two notable doubles on Thursday evening, 9th May, when he retained the Ayrshire Matchplay Championship title over the Bogside course of the Irvine Golf Club, for his second county title success of 2019, having already taken the Strokeplay crown last month.


Having won the matchplay championship four times previously, in 2011, 2013, 2015 and 2018, Smyth faced local member Darren Mallinson (Irvine) in the final this year, and the appearance of a host club member ensured a good crown turned out to watch the match.

The opening hole was won with a par four by Smyth but Mallinson hit back immediately with a winning birdie four at the second, only to  fall one behind again at the third when Smyth secured a birdie three to take the hole. 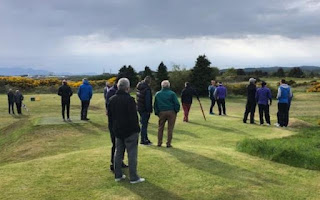 Mallinson leveled the match again at the fifth with another birdie three, only to concede a bitrdie three to Smyth at the sixth to go one behind once again.

The match had been close over the opening few holes but a birdie two at the eighth from Smyth and a winning par four at the ninth saw the defending champion turn for home with  a comfortable three hole advantage. 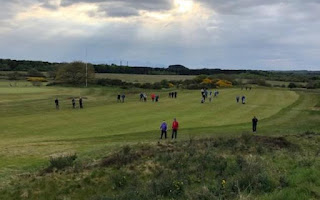 A par four at the eleventh was good enough to increase Smyth's lead to four holes and he pressed his advantage home further with a birdie three at the twelfth to go five up.

Though he conceded the thirteenth hole to Mallinson's par four, pars at the next two holes for Smyth were enough to maintain his four hole advantage and his matchplay title with a 4&3 victory in the match.


Ayrshire golf association President John W Watt presented vouchers to both finalists at the conclusion of the match, and handed over the Matchplay Championship trophy to the 2019 winner Michael Smyth.