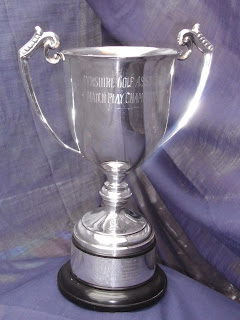 Title holder Michael Smyth (Royal Troon) remains on course to retain the Ayrshire Matchplay Championship Trophy following his victory in the semi finals of the 2019 competition at Irvine GC on Wednesday 8th May.

Bidding to become only the third player to retain the trophy, following Leslie Crawford in 1970 & 1971 and Alex Gourlay in 2001 & 2002, and also attempting to become only the fourth player to win both the Ayrshire Strokeplay Championship and Ayrshire Matchplay Championship in the same year to match the achievement of Leslie Crawford (1983), Gary Holland (1999) and David Wilson (2012), Smyth was up against Tommy McInally (Loudoun) in the semi final.

It was Smyth who had the better of the early holes with a par/birdie start giving him a two hole lead after two, but a bogey five at the third from the title holder allowed McInally to reduce the deficit to one through four holes.

Smyth took control of the match with successive birdie threes at the fifth and sixth to go three holes up and although he lost the seventh to a birdie three, par figures in the closing two holes of the outward half were good enough to give Smyth a four hole lead at the turn.

A concession by McInally at the tenth put Smyth five up and an early conclusion to the match was on the cards, but Mcinally took the twelfth and thirteenth to reduce the deficit to three holes with five to play. Despite the pressure, Smyth rallied to halve the next three holes in pars to close out the match with a 3&2 win.

Brown took the early lead in the second semi final, winning the first hole and maintaining his lead through four holes until he missed a short putt at the fifth for par, which saw Mallinson square the match, which he then followed by winning the sixth to go one ahead.

Problems on the green saw Mallinson surrender the eighth hole to brown to square the match again and a par four at the ninth was good enough for brown to take the hole, and a single hole lead into the inward nine.

Brown edged further ahead at the eleventh with a fine birdie three but Mallinson counterred with a birdie three at the twelfth to go back to one down. The next three holes were halved before Mallinson again squared the match by taking the sixteenth.

At the seventeenth hole Mallinson secured a good par four to take a crucial one hole lead to the final hole and completed a single hole victory when he matched Brown's closing par four.