The R&A’s Championship Committee has decided that it will allow the use of distance measuring devices (DMDs) in R&A amateur events in 2014.

DMD’s have been covered by an optional Local Rule, which has been available under the Rules of Golf since 2006 (see Note to Rule 14-3 of the Rules of Golf), and the Championship Committee will take up this option for 2014.

The Championship Committee would like to emphasise that it has taken this decision for R&A events but is not making this a recommendation for other championship organisers to follow. It remains a matter for individual Committees and Clubs to decide whether or not they want to allow the use of such devices in their competitions.

The Ayrshire Golf Association allowed the use of conforming Distance Measuring Devices in all their events from 2013, with the devices also permitted in the West Of Scotland Inter County Leagues from last year.


From the days when selecting a club was done by “eye”, we have progressed through yardage books, a development often attributed to Jack Nicklaus, distance markers at the sides of fairways and distances on sprinkler heads, to a point where electronic distance-measuring devices, have become quite common in certain areas of the world.


Most of the questions that The R&A receives in connection with distance-measuring devices along with the answers, are provided below.


Q. Can I use a distance-measuring device in a competition?


A. The use of a distance-measuring device during a stipulated round remains contrary to the Rules of Golf – the penalty being disqualification under Rule 14-3 (Artificial Devices, Unusual Equipment and Unusual Use of Equipment). However, since January 2006, a Committee can permit the use of some such devices via a Local Rule.


Q. What kind of distance-measuring devices are allowed by Local Rule?


A. A GPS, laser, smart phone, any really; however, it is important that the device only measures distance. The use of a distance-measuring device that is designed to gauge or measure other conditions that might affect a player’s play, such as gradient or wind speed, is not permitted, regardless of whether such an additional function is used or not, and even if that function is disabled.


To help golfers and/or referees to determine the status of a particular device, The R&A has produced a flowchart explaining what is allowed when the Local Rule is in place, which is reproduced below. 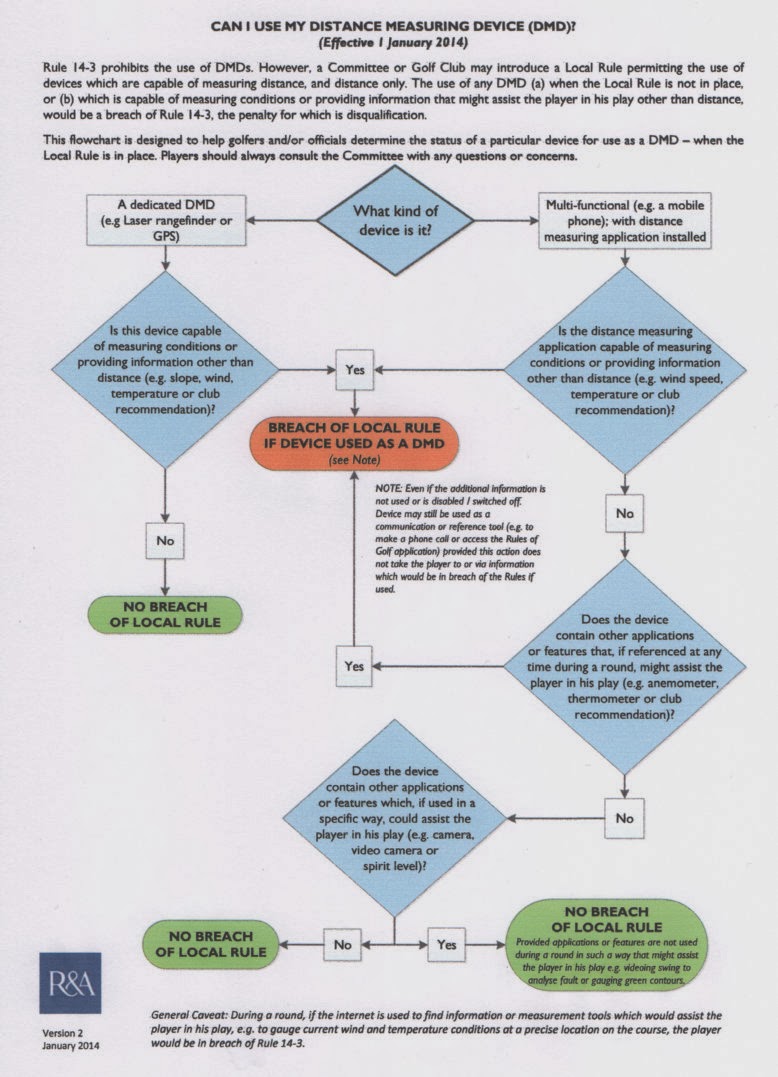