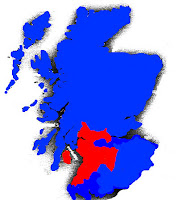 Lanarkshire took the advantage early on with wins in three of the four Under 16 ties, but the home side had comfortable wins in the last three of the under 18 ties to secure a draw in the match.

The next two matches in the series take place on Sunday 23 June when Glasgow play host to Stirlingshire at Sandyhills GC and Renfrewshire meet Dumbartonshire at Greenock.