AYRSHIRE CHAMPION OF CHAMPIONS - four of eight quarter finalists through 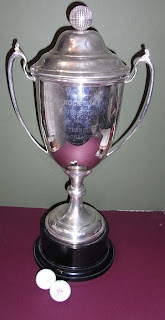 Four of the eight quarter finalists in the 2013 Ayrshire Champion Of Champions competition are now known.

Defending champion Steven McEwan (Caprington), who was first to book his place in the last eight, faces an away tie against Iain McKenzie (Largs Routenburn) in the quarter finals after McKenzie beat his visitor, David Sloan (Doon Valley) by 2 & 1 in their third round encounter.

The other player through to the quarter finals is Bert Ferguson (Troon Welbeck) who beat Gary Jordan (Crosshouse) by one hole in their third round match at Troon.

Ferguson, who is also a member at Royal Troon, faces an away tie against either Craig Hamilton (Ballochmyle) or George Robertson (Irvine Ravenspark) in the quarter finals, as he bids to secure a semi final place over the old course at Royal Troon in August.

The remaining four third round ties are due to be completed by 23rd June.
Posted by AJM at 12:07 pm