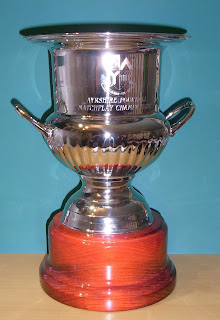 The 2013 Ayrshire Fourball Championship is progressing towards the quarter final stage, with a number of third round matches completed recently.

Mick McGowan & Gerry Reid (Alton) won by 2 & 1 away to Martin Brown & Gary Harris (Malletsheugh) to book an away tie against either Ballochmyle or Fenwick in the quarter finals.

Also through to the last eight are defending champions David & George McCulloch (Brunston Castle) who travelled to paly Ross & Craig Anderson (Kilbirnie Place) in round 3 and returned with a one hole victory. The holders now face a home match against Skelmorlie or Muirkirk in the quarter finals.

Gavin Campbell & Paul Ferguson (Maybole) used home advantage to record a 3 & 2 win over Douglas McMaster & Gary Robinson (New Cumnock) in round 3 and now have another home tie, against Loudoun or Saxone, in the last eight.

The other match played so far saw James Graham & Marc Wallace (Doon Valley) win by 5 & 4 at home to Marc Smith & Craig Boyle (Caprington). In the quarter finals, the Doon Valley pair will be at home to either Beith or Troon St Meddans.

The remaining four third round ties are due for completion by 23rd June.
Posted by AJM at 10:21 am