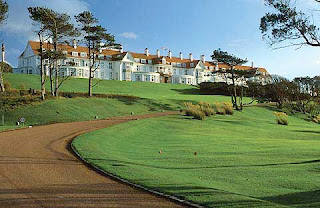 (From the PGA European Tour)

Golf’s iconic names will take on one of the game’s most revered links courses when The Senior Open Championship presented by Rolex returns to Turnberry from July 26-29, and fans can now book their place to see more history in the making on the picturesque Ayrshire coast.
Discounted advance tickets are now on sale for the 26th Senior Open Championship at a historic venue that is universally popular with leading senior players from both sides of the Atlantic.

Scotland’s Sam Torrance, the victorious 2002 European Ryder Cup Captain, will be hoping to lead the home challenge on Turnberry’s Ailsa Course, which he ranks as one of his favourite golfing venues.
“I was at Turnberry a few weeks ago and it looked absolutely magnificent,” enthused Torrance. “I’m really looking forward to The Senior Open there. Aesthetically it is one of the most beautiful looking courses in the world, in one of the most beautiful parts of the world, and it is a great golf course.”
“The Senior Open is always special, no matter where it is played, but it is extra special when it is played in Scotland. I’m from that area – I was born about an-hour-and-a-half from Turnberry – so it will be special.”
Tom Lehman, the leading player on the US Champions Tour in 2011, believes Turnberry would be the perfect venue to add a Senior Open Championship victory to The Open Championship he won at Royal Lytham and St. Annes in 1996.
“Turnberry is an amazing place,” said the 2006 United States Ryder Cup Captain. “It is a tremendous golf course and a beautiful spot in the world. The views from the top of the hill and the hotel looking over Ailsa Craig are exceptional. Winning The Senior Open is on my wish list.”

Carl Mason, the most prolific winner in Senior Tour history, has bitter-sweet memories of Turnberry, having agonisingly let the 2003 Senior Open Championship slip through his grasp.
Mason had a two shot lead playing the final hole on his Senior Open debut, but a closing double bogey allowed Tom Watson to take the Championship into a play-off, which the American won on the second extra hole 26 years after winning The Open Championship at the same venue in the famous ‘Duel in the Sun’ with Jack Nicklaus.

“Turnberry is one of the leading links courses, a set-up that everyone enjoys, and it is very fair,” said Mason. “It is also in a beautiful spot. The Senior Open is an event we all want to try and win and I’m sure we will all look forward to playing Turnberry.”
Barry Lane, winner of the past two Scottish Senior Opens and runner-up in the 2011 Senior Tour Order of Merit, added: “Turnberry is a wonderful venue. For us, as seniors, to play Turnberry is fantastic. We play some great courses anyway but to play a course that is on the Open rota is a real privilege.”
It will be the seventh time that Turnberry’s Ailsa Course has hosted The Senior Open Championship, the most of any venue, surpassing the six editions played at Royal Portrush in Northern Ireland.
Turnberry hosted the inaugural Senior Open in 1987, when Englishman Neil Coles captured the trophy, with Gary Player capturing the title in 1988 and 1990 and Bob Charles lifting the trophy in 1989.
American Loren Roberts took the title on the Senior Open’s last visit to Turnberry in 2006, four years after Watson’s play-off victory over Mason.
Turnberry has also hosted The Open Championship on four occasions, including in 2009, when Watson lost in a play-off to Stewart Cink at the age of 59.
With the US Senior Open moving from its traditional slot in the last week of July to a new date of July 12-15, The Senior Open Championship presented by Rolex will now be the final Senior Major of 2012, as well as the only professional Major Championship in Scotland this year, and fans can now reserve their tickets to be there.
Discounted advance tickets for The Senior Open Championship presented by Rolex can now be purchased online, with season passes now available at £60 and any one day tickets at £18. They can be booked online at www.europeantourtickets.com, where other discounts and offers can also be found.
American Russ Cochran won The 2011 Senior Open Championship at Walton Heath, England, holding off the challenge of former Open Champion Mark Calcavecchia, three-time Senior Open Champion Watson and 2010 United States Ryder Cup Captain Corey Pavin.
Posted by AJM at 10:24 am