The Ayrshire Youths team are the 2013 West Of Scotland Inter County champions following a nail biting 4.5 – 3.5 win in their final match of the campaign on Sunday 13th October, away to Stirlingshire at Buchanan Castle, with the help of an inspirational message from golf legend Peter Alliss.
In winning the match, the Ayrshire side completed the five match series undefeated.
In the mid stage of the match, Ayrshire looked to be cruising to victory but the home side had other ideas and fought back to leave the result in doubt right up to the final two ties.
Greg Vernon got Ayrshire’s first point on the board with a 7 & 5 win and this was added to with wins for both Stuart Easton & Robbie Fitzpatrick, Easton closing out his tie with a superb approach to within three feet at the seventeenth, and what was to prove a very important half match by Greg Telfer in the lead tie.
Liam Haldane with a 2 & 1 win and Stuart Irving with a 6 & 5 result kept Stirlingshire’s hopes alive, leaving the match poised at  3.5 – 2.5 for Ayrshire with two ties remaining on the course.
With Craig Telfer behind in the last tie, it looked likely that the point required for a win for Ayrshire lay in the hands of Gary Morrison, and as it was Morrison became the hero of the hour, closing out his match with successive birdies at the seventeenth and eighteenth for a two hole victory to give Ayrshire the win required to secure the title.
The message from Peter Alliss was the work of team member Alastair Berry who met the golf legend at a recent event and spoke with him about the important match looming. You can hear the message from Peter Alliss by clicking on the link below. 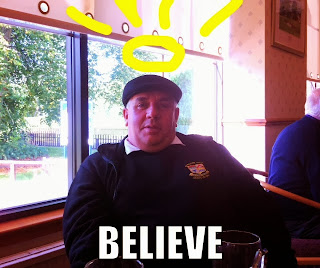 
Glasgow Vs Stirlingshire & Renfrewshire Vs Dumbartonshire


In the A League on Sunday, Ayrshire were involved in an absorbing match at West Kilbride, where four out of the eight ties finished all square, Ayrshire ran out narrow winners against Stirlingshire by 5 – 3, to finish their five matches this season with two successive wins.  In three out of the four shared ties, Ayrshire came from behind to secure a half point.


The present positions in the A League are :-