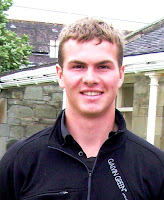 By COLIN FARQUHARSONColin@scottishgolfview.com
Two Scots and one Englishman - all students at Davis and Elkins College, Elkins in West Virginia - finished in the top 10 of the weekend West Virginia Conference Northern Regional tournament over the Jones course at Spiedel Golf Club, Wheeling.
Phil Rutherford, a freshman from Nuneaton, was placed fourth in a field of 65 players with scores of 72 and 77 for 149 over a long and testing par-71 course of 7,001yd.
Ciar Porciani, pictured, another Davis and Elkins freshman, this time from Ayrshire, finished sixth on 152 with scores of 74 and 78.
Alasdair Forsythe from Glasgow, in his senior (fourth) year) at D and E, tied for eighth place on 154 with a pair of 77s.
There was another D and E Scottish student in the field - Christopher Young, a sophomore (second) year student from Cardross. He scored 84 and 78 for 162 and was placed 29th.
Individual winner by four strokes was Joey Seabright (West Liberty University) with very good scores of 68 and 70 for four-under-par 138.
West Liberty scored a double whammy at this event because they also took the team time with a total of 597 - 19 shots ahead of joint runners-up Davis and Elkins and Concord University in a field of 13 teams.
Posted by AJM at 8:41 am