US COLLEGE GOLF - Good finish for Robinson in JALC Invitational 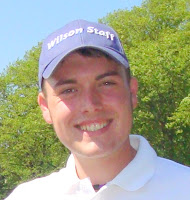 (Courtesy of the Cal Carson Golf Agency)
Former Ayrshire Boys Champion Colin Robinson, a freshman student at John A Logan College, Illinois - finished joint fifth in a field of 43 players at the 27-hole JALC Invitational at Kekopelli Golf Club, Marion in Illinois this week.
Colin had scores of 36 for the nine holes and 74 for the 18 to produce a 110 total for the par 106 competition (par 35 for nine holes, par 71 for the 18).
Winner was Ben Ludlam (Indian Hills) with scores of 34 and 69 for three-under 103 which gave him a two-shot victory.
John A Logan CC won the team title with a total of 432 - five ahead of Indian Hills in a field of seven teams.
Posted by AJM at 11:38 pm