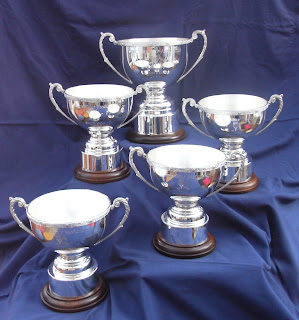 The five league championship winners in the new look Ayrshire Scratch leagues have now been confirmed after the latest series of matches, with Troon Welbeck pipping defending champions Kilmarnock (Barassie) to the Division 1 title after a dramatic last day match betwen the Barassie team and their visitors, Loudoun.

In DIVISION 1, Kilmarnock (Barassie), having conceded their penultimate match to Ayr Belleisle, needed to avoid defeat at the hands of Loudoun in their final match of the campaign. In a dramatic finish to the League Championship, Loudoun held a 3 - 2 advantage with one match remaining on course, which finished all square to give Loudoun a 3.5 - 2.5 win and hand the title to Troon Welbeck on points difference over the individual games, after they topped the table along with Kilmarnock (Barassie) on 26 points.

With all matches now concluded, Troon Welbeck take the title whilst Ayr Belleisle will drop down to Division 2 for the 2012 campaign. The final standings in Division 1 are:-

In DIVISION 2, Ballochmyle, who added to their silverware with the Scottish Club Championship Trophy this week, were runaway League Champions whilst local rivals new Cumnock secured their Division 2 status for 2012with home wins by 4 - 2 over Ardeer and 5 - 1 over West Kilbride in their final two matches of the campaign.

With three matches still remaining, Ardeer need to win at least one of their remaining fixtures to secure Division 2 status in 2012, at the expense of Kilbirnie Place who presently lie at the foot of the table. Present positions in Division 2 are :-

In DIVISION 3, Prestwick St Cuthbert are crowned champions. Needing a win from their remaining two matches, against Tam O Shanter at home and Largs away, the St Cuthbert team were awarded walkovers by both opponents, giving them the title and promotion to Division 2 next season.

With all results now posted, the final placings in Division 3 are :-

In DIVISION 4, Prestwick St Nicholas secured the league title, and Division 3 status next season, with a final match 3.5 - 2.5 win at Moorpark on Saturday 24th September, to edge out Turnberry from top spot.

With only one match outstanding, the present positions in Division 4 are :-

In DIVISION 5, Girvan will be promoted to Division 4 next season, having won the division with room to spare. With one match outstanding in the division, Rowallan Castle could still secure second place with a win over the new League Champions. Present positions in Division 5 are :-

Rowallan Castle Vs Girvan
Posted by AJM at 12:17 am