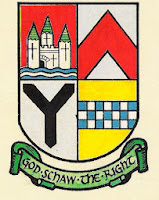 The AGM and Prizegiving of the Ayrshire Ladies County Golf Association  was held at West Kilbride Golf Club on Tuesday 12th November, with Sheila Adams (Loudoun) taking over from Sandy Streets (Largs) as the new Captain.

Prizewinners from the 2013 season were :-

4 May - West of Championship (Windyhill)