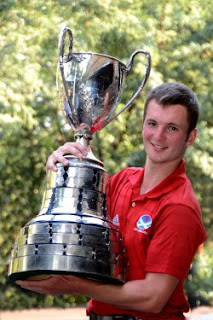 Michael Stewart (Troon Welbeck) has capped his magnificent season by being crowned the 2011 Scottish Amateur Golfer of the Year - and will bring the curtain down on his stellar amateur career in the company of three-time Major winner Ernie Els in the South African Open from tomorrow (24 November).
The 21-year-old from Troon Welbeck built on his outstanding achievements in 2010 to further highlight his amateur CV with a host of successes in 2011, meaning the Golfer of the Year award is a fitting honour to bookend his performances within the Scottish Golf Union’s ranks.
Stewart, who will turn professional immediately after striking his last putt in his maiden European Tour event, follows in the spike marks of previous recipients of the Amateur Golfer of the Year accolade, including Dean Robertson, Steven O’Hara, Richie Ramsay and Callum Macaulay.
Having won the Scottish Amateur title at Gullane, represented Scotland in the Eisenhower Trophy and claimed the SGU Order of Merit all in 2010, the Ayrshireman faced a tough task to match such feats during the last year.
But Stewart’s season took off in some style when he triumphed in the South African Amateur in March, beating international team-mate Paul Shields in the all-Scottish final when the SGU squad were involved in warm weather winter training, thereby earning his place alongside defending champion Els at Serengeti Golf Club in Gauteng this week.
That achievement was almost topped at The Amateur Championship at Hillside in the summer, only to be edged out by Australian Bryden Macpherson in the 36-hole final. After reaching a career high seventh place in the World Amateur Golf Rankings during 2011, Stewart earned his place in the Great Britain and Ireland team for the Walker Cup match at Royal Aberdeen in September and played a pivotal role as the home side upset the odds to defeat the USA for the first time in eight years.
Stewart is now thrilled to have added another notable title to his growing collection.
The young Scot, who will be presented with his prize at the annual Scottish Golf Awards in March 2012, said:
“I’m delighted to win the Scottish Amateur Golfer of the Year Award and it shows the progress I’ve made as a golfer over the last 18 months.


“Reaching the final of The Amateur Championship and winning in South Africa were both brilliant, but playing in a winning Walker Cup side in front of a Scottish crowd surpassed everything.


“There are some great names on the Scottish Amateur Golfer of the Year trophy and hopefully I can follow in the footsteps of the likes of Richie Ramsay and make the transition into successful professional Tour player.”
Despite falling short at the recent European Tour and Alps Tour Qualifying Schools, Stewart – also the 2008 Scottish Boys Champion - refuses to be derailed from his professional aspirations.
Soon to officially sign with the ISM management group, Stewart will make his debut in the paid ranks at next month’s Thailand Open before heading to the Far East in January to contest the Asian Tour’s Qualifying School. He also hopes to gain a number of invites for next season’s European Challenge Tour.
Stewart, who is to join up with the SGU squad in Abu Dhabi next week to work on all aspects of his game, added:
“It’s my last event as an amateur this week. I’m turning professional after it. So hopefully my last putt as an amateur comes on Sunday night.


“There is not much else I can achieve in the amateur game. Being a professional golfer is what I want to do.


“My South African Amateur victory was important to me showing I could perform on the international stage and I’m really looking forward to playing this week in the South African Open.


“It’s going to be amazing to play with a former Open champion in Ernie Els for the first two rounds, a player I can learn so much from.”
Stewart’s award was derived through his performances at home and abroad in 2011, using the World Amateur Golf Rankings.
Posted by AJM at 12:09 pm