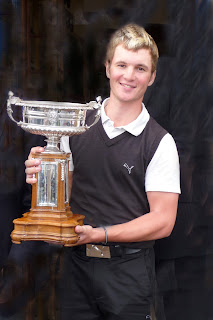 Ayrshire’s Michael Stewart has been crowned the 2010 Scottish Golf Union Order of Merit Champion to round off a superb season for the Troon Welbeck golfer.
The 20-year-old Scotland international, who captured the Allied Surveyors Scottish Amateur Championship at Gullane last month, finished 43.5 points clear of Peterhead’s Philip McLean, who edged out fellow North East player Jordan Findlay for the runner-up spot following the completion of the domestic circuit after yesterday’s South East District Open Championship.
Stewart, who won the SGU Boys’ Order of Merit two years ago, has just returned from Italy where he represented GB&I in the St Andrews Trophy, while he is part of the three-man Scotland team which will defend the Eisenhower Trophy in Argentina in October. In June, he reached the last 32 of The Amateur Championship at Muirfield, finished seventh at the prestigious St Andrews Links Trophy and tied third in the Tennant Cup at Haggs Castle.
The former East Tennessee State University student was delighted with his latest honour, saying:
“It’s great to win the Order of Merit and it’s a nice reward for all the hard work I’ve put in over the last year. I was playing well over in the States during the early part of the season and I’ve managed to keep that going since returning to Scotland in May.”
“Winning the Scottish Amateur Championship at Gullane was obviously the highlight and I’m also delighted to achieve my main goal of being selected for the Eisenhower Trophy team. My coach Ian Rae has been a big help as had my dad and its nice having such supportive people around me.”
“My next target is the Walker Cup next year at Royal Aberdeen. I talked at length to Nigel Edwards the GB&I captain in Italy last week and he gave me some great advice and shared his experiences so I’m really looking forward to next season with a place in that team to aim for.” added Stewart, who was also Scotland’s leading points scorer at the recent Home Internationals, dropping just half a point in six matches.
McLean, runner-up in the St Andrews Links Trophy and winner of the Edward Trophy, improved by two places on last season’s fourth spot in the SGU rankings to clinch the runners-up spot, with a resurgent Findlay just 2.5 points behind him in third place.
Last year’s Allied Surveyors Scottish Amateur Champion David Law ended the year strongly with three consecutive top four finishes to capture fourth spot in an injury-ravaged season, with St Andrews New’s Peter Latimer, winner of the East of Scotland Championship, in fifth place just ahead of Fife and Scotland team-mate James White.
Former winners of the SGU Order of Merit include Andrew Coltart (1991) Dean Robertson (1992, 93), Gordon Sherry (1995), Steven O’Hara (2000, 2001), Callum Macaulay (2007) & Steven McEwan (2008).
Final Standings in the 2010 SGU Order of Merit
466.00 - Michael Stewart Troon Welbeck
422.50 - Philip McLean Peterhead
420.00 - Jordan Findlay Fraserburgh
382.50 - David Law Hazlehead
380.00 - Peter Latimer St Andrews New
375.42 - James White Lundin
355.00 - James Byrne Banchory