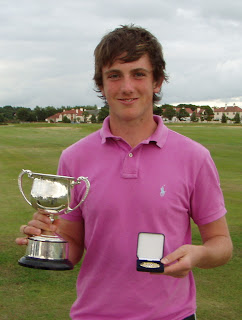 Charlie Macneal of Troon Welbeck stormed to a three shot victory in the 2010 Ayrshire Boys Championship, held over the Troon Lochgreen course on Thursday 5th August with a stunning eight under par second round of 66.

16 year old Macneal, who plays off a handicap of one, opened in the morning with a two under par total of 72 which left him in joint third place behind the first round leader Euan Walker (Kilmarnock Barassie), who carded a four under par 70, and clubmate Ben Gibson who returned a three under par 71.


In the afternoon however, Macneal blew the field apart with his spectacular 66 which was the best second round score, and indeed the best 18 hole total of the day, by a full four shots.
Macneal opened his round with three successive birdies and carded a further three birdies at the 5th, 7th & 8th holes along with three pars to cover the outward nine in 32 shots, six under par.
The new champion carded his only bogey of the second round at the par three 10th hole but recovered with further birdies at the 12th, 4th and 16th holes for an inward nine of 34, two under par, and a superb eight under par round of 66, and a two round total of 138.
First round leader Euan Walker had a three under par 71 in the afternoon to take the runner up spot with a 36 hole total of 141.
The remaining three scratch placings were all filled by Charlie Macneal's clubmates, Marc Smith (73-72=145), David Wilson (72-75=147) and Ben Gibson (71-76=147).
The prize for the best nett score of the day was won by Graeme Ritchie, also of Troon Welbeck, who returned nett scores of 70 & 67 off his 3 handicap for a total of 137.
Other nett prizes went to 9 handicapper Ian Napier of Ayr Belleisle (67-71=138) and 4 handicapper Greg Telfer of Prestwick St Cuthbert (67-72=139)
The CSS for both home and away players in the morning was 73 (no change) and in the afternoon was 72 (-1). 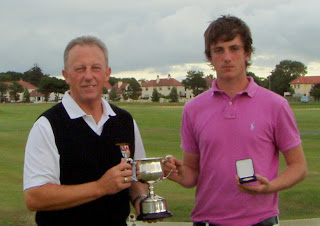