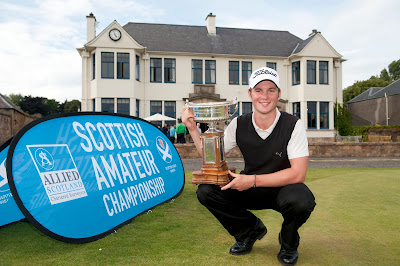 The 20-year-old from Ayrshire’s victory comes just two years after winning the Scottish Boys Championship at Southerness and underlines his potential as one of the country’s brightest golfing talents.

Having been four up at the turn, Stewart was made to fight all the way by Findlay, who closed the gap to just two holes with three holes to play. However, Stewart responded as he has all week, drilling a stunning 7-iron to seven feet at the par three 16th hole and calmly rolling the putt in for a winning birdie, before embracing his dad and caddie Robbie.

Findlay started brightly in the afternoon round, firing a birdie three at the tough second hole to narrow the gap to three after a great approach to 6 feet. Stewart’s second shot to the next hole found deep rough and he was forced to concede the hole after the ball couldn’t be found by the army of spectators.

The next seven holes were halved as both players shaved the hole with several birdie attempts but Stewart’s breakthrough came at the 29th hole, when Findlay failed to get up and down for a par after a loose tee shot. Stewart began to turn the screw at the 30th hole when a 4-iron approach from 188 yards landed within 8-feet of the pin and the Scotland star sank the eagle putt to restore his four-hole lead.

Findlay, the former British Boys Champion, responded in some style, almost holing his 8-iron tee shot at the 31st hole to win the hole with a birdie two. Findlay then made a brilliant four at the next for a half to stay in the game and a birdie four at the 33rd hole narrowed the gap to two holes once more.

With the pressure on and a large crowd circling the green, Stewart hit the “tee shot of his life” for the winning birdie at the 33rd hole, becoming the first golfer since Steven O’Hara back in 2000 to win the national men’s championship two years after collecting the boys.

“It’s a very special moment for me winning the Allied Surveyors Scottish Amateur Championship here at Gullane. Jordan played some fantastic golf but I got some good breaks and hit great shots at crucial times. I went out this afternoon as if I was still level and needed to be at my best to hold him off.” Said a delighted Stewart.

“It’s a fantastic achievement and extra special to have my dad on the bag and family and friends through from Troon. I worked hard over the last few weeks to be able to shape the ball both ways, which you need to do here and it’s paid off. It’ll be a quiet celebration back at my home club tonight before I head off to Finland for the European Individual Championship.” He added.

Findlay can take heart from a fantastic performance all week, where he knocked out number one seed James Byrne and continued his impressive form this season.

“I’m disappointed just now as you want to win big events, but you don’t get to finals like this without playing good golf. That’s probably the best I’ve played tee to green but it was a frustrating day with the putter and nothing seemed to drop. It’s great to play in front of a big crowd and it was a great experience. All credit to Michael who played wonderful golf. He’s a gritty competitor as well and I’m delighted for him.” said Findlay.

“We’ve had another great championship with some superb golf on show. It was a great advert for amateur golf in Scotland and it’s very encouraging to see two talented young players who have come through the junior ranks performing at the top of their game. We are proud to support the SGU and their flagship event and I’m sure everyone has enjoyed their week here at Gullane.”

Michael Stewart reached the final with successive 4&3 wins on Friday over Jordan McColl (Scotscraig) and Stephen Neilson (Dunbar) in the quarter and semi finals respectively.

Ayrshire's other player in the last eight, Michael Smyth (Royal Troon), lost out to James Byrne (Banchory) in their Friday morning quarter final by 3&2.
Posted by AJM at 2:01 am