The quarter finals of the 2010 Ayrshire Boys Matchplay Championship were completed on Thursday evening at a breezy Prestwick Golf Club with three Troon Welbeck players and one Kilmarnock (Barassie) member winning through to the semi finals. 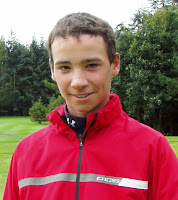 The first quarter final was between the new Ayrshire Boys Champion Charlie Macneal (Troon Welbeck) - pictured left -and Ciar Porciani (Ayr Belleisle). Macneal, who has hit a rich vein of form over the last two weeks, was always in control of the match as he secured a semi final place with a 5 & 4 victory.
Defending champion David Wilson (Troon Welbeck) - pictured right - faced clubmate Ben Gibson in the second quarter final and the match remained close throughout. Wilson held a one hole advantage going to the 15th but bunker trouble allowed Gibson to square the match, only for Wilson to win the 16th to restore his lead, which he maintained to the final green for a one hole win. 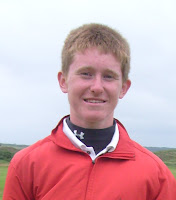 The third quarter final paired Greg Telfer (Prestwick St Cuthbert) and Graeme Ritchie (Troon Welbeck) - pictured left -  and again the match remained close throughout, with Telfer holding a one hole advantage playing the 17th. Trouble in the rough from the tee saw Telfer surrender his advantage and a halved hole at the 18th saw the match progress to extra holes. 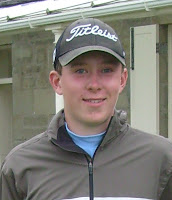 With a strong left to right wind against, Ritchie safely found the fairway from the tee but Telfer saw his effort drift over the railway wall and out of bounds. Telfer battled on but ultimately conceded Ritchie a par four and the match at the first extra hole.
The final match on the course involved Sean Thorburn (Ayr Belleisle) and Euan Walker (Kilmarnock Barassie) - pictured right. Three ahead at the turn, Walker increased his lead to five holes after the short 11th and despite losing the 12th to par, closed out his opponent by taking the 13th and 14th for a 6&4 victory.
The semi finals, which are scheduled for Friday evening are :-
1600 - CHARLIE MACNEAL (Troon Welbeck) Vs. DAVID WILSON (Troon Welbeck)
1615 - GRAEME RITCHIE (Troon Welbeck) Vs. EUAN WALKER (Kilmarnock Barassie)
Posted by AJM at 12:40 am