The club are ecstatic at reaching Round 9 after winning a thrilling match against Deer Park ladies on Saturday last, in their first appearance in the event. 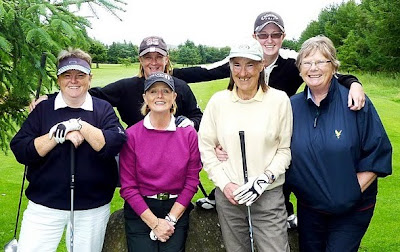 The Skelmorlie Team -
Back row: Janet Harkness & Alex Sargent
Front row: Gillian Pollock, Kath Mackellar, Aileen Donaldson & Jenny McGee.
Team member Jenny McGee gave a run down on the latest match.
"Our match against Deer Park turned out to be yet another nail-biter. With the first four games tied at 2-2 it was once again down to our captain Kath Mackellar to keep her cool at dormy two down. This she did in fine style, sinking two crucial long putts to force play on to the 19th hole".
"This was the third such scenario she had been involved in, having been in a similar situation against Dumbarton in Round 3 and Bearsden in Round 5. Once more she played the 1st hole in textbook fashion and having reached the green in two she putted out to seal yet another victory and send us on our way to Manchester next month".
as Jenny explained :- "We (Skelmorlie) are only a small club, which many folk,even in our own county of Ayrshire, have never heard of. However, in recent years we have gained many more lower handicap ladies and therefore felt we were capable of entering a good team. We are a mix of youth and experience, our youngest player being 21 year-old Alex Sargent, who has been playing since a junior of 11 and now plays off 12".
"The rest of our team of six consists of two PE teachers,one retired and one head of department in a local high school, a retired meteorologist, a retired geography teacher and a young mum of two promising boy golfers who is an office manager.
All at Ayrshiregolf wish the Skelmorlie ladies all the best in the next stage of the competition in Manchester.
Posted by AJM at 2:01 am

Congratulations to Skelmorlie Ladies on reaching the quarter finals. A magnificent achievement both at individual and team level. Go Girls Go !!!