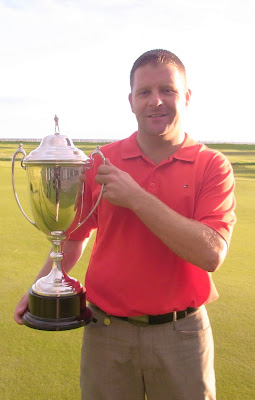 Defending champion Tommy McInally (Loudoun) made it two in a row at Royal Troon on Friday evening when he defeated Scott McCahill (Maybole) in the final of the 2010 Ayrshire Champion Of Champions Trophy competition to retain his title.
McInally, who had four previous wins in the event under his belt, looked favourite against first time finalist McCahill, but from the first hole McCahill served notice of his ability, holing from four feet for a birdie three to take a one hole lead after one. With the outward holes playing downwind, the two players shared the next three holes with pars before the match was squared when McCahill was long and left from the tee at the par three fifth hole and could not get up and down, prompting him to concede McInally's 15 foot putt for a two.
As McCahill found a bunker on the right from the tee at the long sixth, McInally took full advantage and , with his opponent struggling to the green in four before missing his par putt, Mcinally was conceded a second successive birdie and took a one hole lead in the match.
A half in solid fours at the seventh brought the players to the 8th tee, the famous Postage Stamp. McInally's ball was bunkered on the front right of the green whilist McCahill's effort came to rest on the steep bank of rough on the left of the green.
McInally's effort to extracate himself saw his ball run into an adjacent bunker before he made the putting surface in three with his next effort. Mccahill, facing a severe slope down to the green and with little green to work with, played a superb wedge shot which came to rest 12 feet from the hole. McCahill completed a superb recovery by holing his putt for a par three and squaring the match once again.
A less dramatic hole to finish the first half saw the players half the hole in par to turn for home all square.
In fine but testing conditions, with a stiff breeze from the North, McInally and McCahill's scores of 35 and 37 respectively against the par of 36 were impressive.
The players turned back for home at the 10th and back into the testing breeze. It was over these inward holes that McInally took control of the match and used his shotmaking ability to its full advantage to overcome McCahill.
At the 10th hole, McCahill found a rough hollow on the right from the tee and his attempt to reach the green from the unfavourable lie saw his ball plummet into a gorse bushe, necessitating a penalty drop to get the ball back in play.
McInally missed the green to the right with his approach whilst McCahill played his fourth shot onto the back left fringe of the putting surface. An excellet chip to 10 feet from the hole by McInally, coupled with a missed bogey attempt by McCahill prompted a conceded par four to McInally who was now one hole ahead once again.
The railway hole, the hardest hole on the course, was halved in bogey fives and when McCahill failed to get up and down after missing the 12th green in two, whilst McInally two putted from the bottom tier of the green for a par four, McInally's lead was extended to two holes.
The players again turned into a stiffening wind at the 13th and it was noticable that McIanlly was considerably longer offf the tee into the breeze, giving him a distinct advantage over the closing holes.
So it proved at the 411 yard 13th hole which was playing considerably longer into the wind. McCahill was slightly left from the tee and his approach came up short and in a gulley on the left of the approach to the green. Mcinally, hitting from some 30 yards further on, and left with an approach shot of over 200 yds struck a superb wood shot which he drilled through the wind and which came to rest on the green some 40 feet from the hole. As McCahill struggled on the hole, McInally had a comfortable two putt for his par four and a three hole lead.
With holes running out, McCahill was unable to get up and down for his par at the par three 14th hole, leaving McInally with a 7 foot putt for a winning three, which he duly slotted home to go dormie four.
The 15th hole, which proved to be the last one of the match, saw McInally again show his prowess into the wind, with his second shot coming up just short of the green whilst McCahill struggled to control his approach. Moments later, after a good chip to the green, McInally's par four was conceded by McCahill and the Champion had retained his title with a 5 & 3 victory.
At the conclusion of the match, which was watched by a sizeable gallery of spectators, prizes were presented to both players by Ken Arthur, Captain of Royal Troon Golf Club - pictured below with the finalists -, who then passed the Champion Of Champions Trophy into the custody of Tommy McInally for another year. 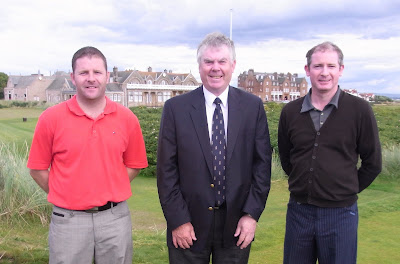 McInally can now look forward to trying to match his previousl feat of winning the title three years in a row, which he successfully achieved in 2003, 2004 and 2005 to become the first and only player to do so in the 35 year hstory of the event.
Posted by AJM at 12:20 am