THE AMATEUR CHAMPIONSHIP - Stewart into last 32 at Hillside 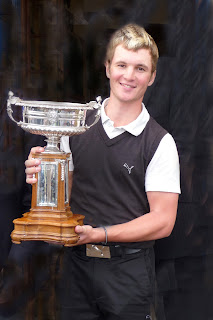 In the second round of the matchplay stages, played on Wednesday, Stewart defeated Mark Young (Longridge) by 5 & 4

In the third round of the matchplay, which is scheduled to be played on Thursday morning, Stewart faces Daniel Stapff (Brazil) for a place in the last 16.

Whoever progresses from the Stewart Vs. Stapff match is scheduled to play the winner of the tie between Philip Fendt (Austria) and Paul Cutler (Portstewart) on Thursday afternoon, with a place in the Friday morning quarter final matches at stake.
Posted by AJM at 11:30 pm